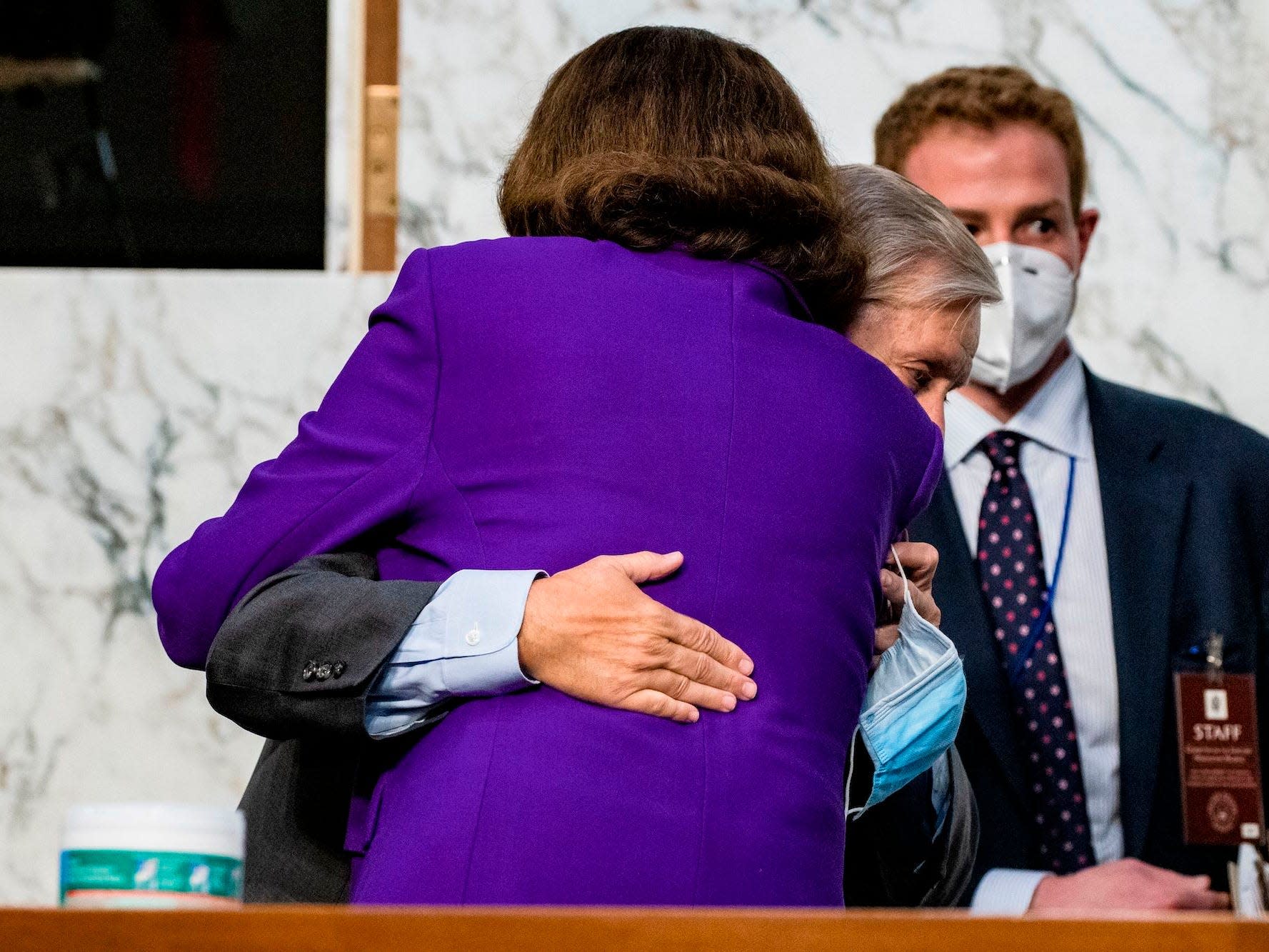 Democrats are calling for Sen. Dianne Feinstein to step down from her leadership position on the Senate Judiciary Committee after she hugged Republican Sen. Lindsey Graham at the close of Judge Amy Coney Barrett’s Supreme Court confirmation hearings on Thursday.

Barrett’s confirmation hearings have been politically divided from the start, with Republicans praising her judicial philosophy and Democrats fearing that she would slash the Affordable Care Act and overturn precedents like Roe v. Wade. Barrett also repeatedly avoided answering questions during the hearings.

On Thursday Feinstein not only hugged Graham, who chairs the committee, but also thanked him for a job well done.

“This has been one of the best set of hearings that I’ve participated in,” Feinstein told Graham.

In response Brian Fallon, executive director of the progressive group Demand Justice, told the Associated Press that “it’s time for Sen. Feinstein to step down,” and if she doesn’t “her colleagues need to intervene.” His group has also started an online petition people can sign if they agree with that sentiment.

Eli Zupnick, a spokesman for Fix Our Senate, also said Feinstein’s praise of Graham was out of line.

“Senator Feinstein is absolutely wrong about what is happening in the Senate and in her Committee,” Zupnick told the AP.

Zupnick said that Republicans were trying to “jam” Barrett’s nomination through before the November 3 election and it “should not be treated as a legitimate confirmation process.”

Others were upset that neither senator wore a face mask during the embrace. Graham recently refused to take a coronavirus test.

Judicial appointments have long been a flash point between Democrats and Republicans, especially during President Donald Trump’s administration. Senate Majority Leader Mitch McConnell has worked with the president to remodel the judiciary through the installation of conservative judges.

As of 2019, one in four US circuit court judges are Trump appointees, and Barrett looks set to be his third Supreme Court justice, solidifying a conservative majority on the nation’s highest court for years to come.

All of this has left many liberals bitter at Democratic leadership for letting it happen, including Feinstein, who is the minority leader on the Senate Judiciary Committee and will become chair if the Democrats win the Senate next month.

In a Thursday tweet, “Pod Save America” host Jon Lovett called the Republican judiciary strategy an “ongoing travesty” and said Feinstein’s behavior at the close of the hearing shows “how poorly represented” Democrats are by her.

Feinstein, 87, is the fifth-most senior member of the Senate, second only to Patrick Leahy within her own party. She has represented the state of California since 1992, and has almost always won reelection by a large margin.

Business Insider reached out to Feinstein’s office for comment Friday morning, but did not immediately receive a response.

At the conclusion of the Barrett hearings on Thursday, Feinstein released a statement saying she planned to vote “no” on Barrett’s confirmation.

“Judiciary Committee Democrats had one goal this week: to show what’s at stake under a 6-3 conservative Supreme Court – and we did that. We showed that Judge Barrett has a long history of opposing the Affordable Care Act and Roe v. Wade and represents the vote to overturn both,” she said.

“The Senate is structured so the majority had absolute control over this process. When Republicans signaled they’d move ahead in the face of all objections, the only thing we could do was show this nominee would radically alter the court, and we accomplished that.”